Home improvement and remodeling projects have been increasingly popular as more people hang out at home. Spending on home improvement averaged $8,305 over 2020, which is a $745 increase from 2019. The most popular projects were bathroom and kitchen remodels. On average, homeowners spent $2,995 on each home renovation project.

And though they may have been fun, many are probably wondering if these projects were worth it financially and how much renovations will increase their property value.

READ ALSO: 8 of the best places to live in Metro Phoenix

In this report, we analyzed thousands of real estate listings in 10 of the hottest real estate markets in the country. The goal was to find out where renovated or updated homes see the largest increase in price per square foot. Before we begin, keep in mind that your own experience may vary based on various factors, such as the renovations you invest in and the age of your home.

• Dallas homeowners see the most ROI, at a 23% increase in value per square foot, followed by Miami and Houston.

• Riverside, CA, has the lowest renovation ROI, with just a 2% increase in value per square foot, followed by San Diego and Las Vegas.

Cities With the Lowest Renovation ROI

Of course, not every market sees such gains from renovations. There are some cities where renovations offer little to no increase to home value at all.

If you want to renovate your home and live in one of these markets, though, fear not. You can use this data to make sure your renovation costs align with the rest of the market and ensure that your renovation spending stays in check.

Located south of San Bernardino and east of Los Angeles, house values are somewhat lower than other west coast markets. The median sale price is $575,000, and homes spend an average of 24 days on the market.

With this data in mind, it helps to apply that to the average Riverside home. Despite just a 2% value gain from renovations, that still translates into over $19,000 in increased house value. An average-sized, non-renovated home would sell for roughly $787,370. After renovations, that value becomes $806,770.

Another California city is the next on the list. San Diego boasts expensive homes and a limited housing inventory.

The next listing sees the return of double-digit value increases after renovations. Home prices are less than its California neighbors. The median sale price of an average Vegas home is $375,000, and homes spend a mere 25 days on the market.

For an average-sized, non-renovated home in Las Vegas, that would command an extra $48,000 when the home sells. Specifically, a non-renovated home would sell for roughly $499,320. With renovations, that number climbs to about $547,615.

The Phoenix market is in a similar position as Las Vegas. With a population of over 1.6 million, this state capital also features a heated housing market.

Like Las Vegas, the Phoenix market reflects renovation values more favorably than California markets. With a median sale price of $402,000, renovations improve the home’s value by 10%. In fact, non-renovated homes are priced at an average of $258 per square foot. Compare that to $284 for renovated homes, and that $26 improvement begins to pack on the value.

We head back to the West Coast for our final market. Seattle and other Pacific Northwest markets are notorious for their high values and costs of living.

Seattle showcases a median sale price of $790,000. With an average of just seven days on the market, it’s clear how hot the Seattle housing market is. That high worth translates into a high square footage value as well, even before renovations. An average house is worth $487 per square foot before renovations.

Specifically, an average-sized house in Seattle will sell for $1,101,650 before renovations. This is an impressive number, indeed. However, renovations could add another $144,000 to that value, as renovated homes sell for an average of roughly $1,245,995.

5 Cities With the Highest Renovation ROI

The following five cities offer the highest ROI for home renovations. The good news is that despite the high cost of living in many of these cities, the value of a home will show impressive growth, especially with well-implemented and -researched renovation projects. You can use the following for inspiration for your next project: 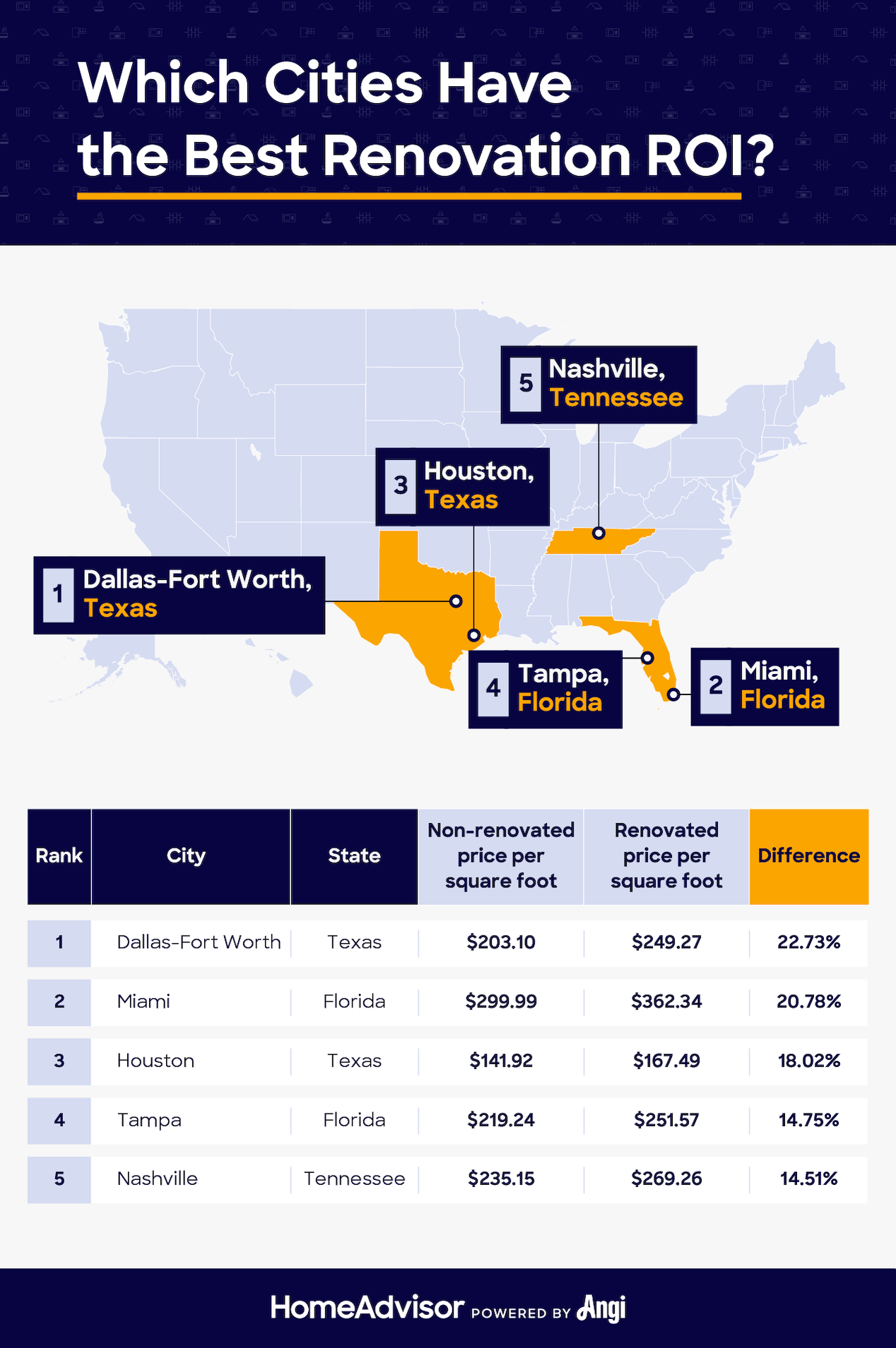 The Dallas/Fort Worth housing market is one of the largest in the nation. The median sale price is $385,000, and homes spend about a month on the market.

To break that down a bit further, we also considered the average square footage of homes completed in 2020. In the Dallas/Fort Worth market, that average comes out to be about 2,260 square feet. With those numbers, we find that an average-sized, non-renovated home would sell for around $459,210. Meanwhile, a renovated home would sell for around $563,600, meaning that a renovation could help boost your home’s value by over $100,000.

While not as booming as Dallas/Fort Worth, Miami is another real estate hotspot. Homes have a median sale price of $415,000, and they’re staying on the market for 52 days, which is nearly double that of the Dallas-Fort Worth market.

An average-sized Miami house would be valued at around $678,280 before any renovations. After improvement projects, that value jumps to around $819,255. In other words, home renovations can add an extra $140,000 to your home’s value.

The next entry brings us back to Texas in the state’s most populous city: Houston. Compared to other cities on the list, Houston features relatively low average home values. The median sale price is $284,900, and homes only spend 19 days on the market.

Specifically, renovated Houston homes of average size are worth $378,695, compared to around $320,885 for non-renovated homes.

The fourth listing is another of Florida’s largest cities. The median sale price of Tampa’s homes is $334,900. Unlike Miami, Tampa homes are gone in the blink of an eye, spending 11 days on the market.

The fifth-highest ROI can be found in Nashville, another booming market with 1,314 listings this year alone. Sales are quick, too, with homes spending just 29 days on the market before selling for a median sale price of $381,000.

Considerations When Remodeling Your Home

No matter the market, renovations add some value to the home. Even if you’re not looking to sell, renovations can help you create the home of your dreams. If you need help planning for your next project, find a home renovation pro near you.

Methodology: Using Redfin.com, we analyzed real estate listings in 10 of the hottest housing markets in 2021, according to Zillow.

When it comes to the number of listings, we analyzed: